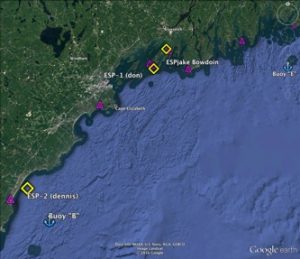 The Alexandrium catenella bloom in 2016 was detected in low concentrations by 3 ESP instruments deployed in the western Gulf of Maine. Two ESPs were located in Casco Bay, ME and off of Ogunquit, ME, both within 1 nautical mile from ME DMR shellfish monitoring sites. A third ESP was located in a wetlab at Bowdoin College Coastal Facility with wild mussels placed in an adjacent tray near the ESP intake. Lumbos Hole, a local hotspot for shellfish toxicity, is near the wetlab (see Fig. 1).

The 3 ESPs consistently detected the presence of A. catenella in low concentrations (~200 cells/Liter) early in the bloom season (May), but the weak bloom ended early without further development in June, consistent with the detection of low levels of shellfish toxicity in the region. Near real time data streamed from the 3 ESPs during the season and is available on WHOI’s ESP server at:

These results indicated that the A. catenella bloom never fully developed into significant populations in the western Gulf of Maine in 2016. Along the eastern Maine coast, shellfish toxicity was also low suggesting either that an offshore bloom in eastern Maine never reached the shoreline or the lack of a significant bloom in 2016 was Gulf-wide. The ESP and shellfish toxicity observations were consistent with the seasonal “small” bloom forecast that was based on the low abundance of A. catenella benthic cysts collected during the preceding Fall season (Nov. 2015) from the NOAA ship Henry Bigelow.

The daily updates of the Alexandrium catenella estimates from the 3 ESPs in the Gulf of Maine are available at this website:

As you can see, A. catenella populations were not detected this week by the NA-1 probe spots on the hab arrays at all 3 ESP locations. Note that we remotely dialed the sample volume down from 4000ml to 1000-2000ml to help reduce the background that was present on some of the arrays. The background has subsided for now, perhaps due to a change in water masses. To detect the low populations that have been present in the region, we just dialed the sample volume back up to 4000ml.

Two stx toxin assays were completed by ESPdon on Monday and Thursday in collaboration with Dr. Greg Doucette at NOAA NCCOS Center for Coastal Environmental Health and Biomolecular Research. With a full 4000ml sampled, Greg reports that ESPdon has detected a "low level positive hit for the stx assay".

Earlier in the week, the hab arrays on ESPdon and ESPjake (both in the Harpswell Sound area within Casco Bay) indicated the simultaneous presence of several Pseudo-nitzschia species as the MUD2, has2, fraud, and pungens probes signaled off. As of yesterday, those signals have subsided. Dr. Kate Hubbard (Florida Fish and Wildlife) and Dr. Holly Bowers (MBARI) are collaborating on that effort with additional Pseudo-nitzschia probes added to the hab array this year.

Have a excellent Memorial Day weekend,

All 3 ESPs (ESPdon, dennis, and jake) are consistently working in the western GOM after deployment on May 2.
The early returns continue to indicate that the Alexandrium population is in the 100-300 cells/L range with the highest concentration (274 cells/Liter) reported by ESPdennis at mooring ESP-2 near Ogunquit on May 9. ESPdennis is returning some arrays with high background that we could not analyze...the high background could be related to something in the sample water (e.g., Phaeocystis sp.) that might force us to dial back the sample volume to compensate. ESPdon is showing a consistent rise above the lower limit of detection to >100 cells/L now, while ESPjake at the Bowdoin wetlab is returning mostly positive signals at about 100 cells/L.

In addition, ESPjake has shown signals from the MUD2 probe as well as a new "has2" probe for Pseudo-nitzschia. Holly Bowers from MBARI in collaboration with Kate Hubbard have added extra probes to the WHOI arrays to help distinquish the various species in that group.

For the locations of the ESPs and the latest near real time plots of the Alexandrium catenella (NA1 probe) data, please tune to:

Have a good weekend,

Just wanted to provide you with an update for deployments of ESPs in the Gulf of Maine...

ESPjake was just deployed in a wetlab setting at the Bowdoin College coastal facility on Orr's Island, Maine (near Lumbo's Hole, a ME DMR PSP site).  Jake is sipping raw seawater from a wetlab tray with the source water pumped up from Harpswell Sound. In an adjacent tray with the same source water, mussel bags were placed for harvest at a sampling rate of 2-3x times per week to determine shellfish toxicity while ESPjake will be sampling at 3-5x per week.

After an initial test, Jake's mission was started yesterday...early returns are indicating weak positive "hits" from the NA1 probe that targets Alexandrium fundyense. Estimates from the standard curve revealed concentrations at about 100 cells/L, close to the detection limit of the ESP. The early results agree with the low shellfish toxicity results at Lumbo's Hole just posted by Alison (ME DMR). Furthermore, the array also returned solid "hits" from a new Pseudo-nitzschia probe (muD2).

The data web server was just activated with a Google Earth map showing the 3 deployment sites for 2016:

Please click on the year and instrument to see the near real time plot...only ESPjake is currently returning field data.

Meanwhile, ESPdon and ESPdennis are on deck in the LOSOS High Bay at WHOI. They are installed in their mooring systems and are undergoing a final systems check with deployment into the western Gulf of Maine scheduled for next week from the R/V Connecticut.

As the season starts, I want to gratefully acknowledge the support of our partners at MBARI, McLane Research, Inc, EOM offshore, Inc, the WHOI buoy group, and Neil McPhee (WHOI). Funding was provided through NOAA-MERHAB, NOAA-NERACOOS, and the NSF Partners for Innovation: Building Innovation Capacity (PFI:BIC) programs. Finally, I really appreciate the hard work of Liann Correia, a new hire in January into the ESP lab of Dr. Don Anderson. Liann has been working closely with me to prepare the ESP instruments and their moorings to make them fully operational for the season.

Another bloom season has begun, so check back for the latest ESP results,