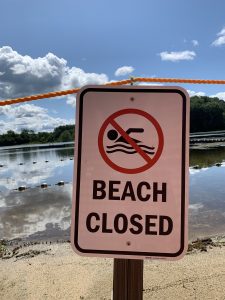 Microcystis spp. are one of the most common groups of harmful cyanobacteria impacting New England freshwater bodies.  Cells form round colonies that can move vertically in the water column by use of internal gas vesicles.  Certain species in this genus produce toxins known as microcystins as well as saxitoxins, which are also produced by other freshwater cyanobacteria species, as seen below.  These toxins enter the surrounding waters when cells are ruptured, which can occur naturally at the end of a bloom, or artificially during recreational activities.  When consumed via drinking or eating contaminated food, cyanotoxins enter the body through the intestinal tract and affect the liver, brain, and other tissues, causing symptoms of headache, sore throat, vomiting, stomach pain, diarrhea, and blistering around the mouth.  Symptoms of dermal contact and inhalation include skin irritation, nasal irritation, and asthma.  Livestock and pets are susceptible to the same health problems, and stories of dogs dying after swimming and then licking their fur are not uncommon.

Microcystis is a naturally occurring freshwater organism, but can bloom in extraordinary densities during periods of warm temperatures and nutrient-rich conditions.  A warming climate increases risk for harmful blooms, as does nutrient loading from residential and commercial runoff.  If a regional water regulatory body issues an advisory for Microcystis, avoid entering, consuming, or taking part in recreational activities on or near the water, and do not let your pets drink from or swim in these waters.

Dolichospermum, formerly known as Anabaena, is another common cyanoHAB culprit in New England waters. Cells form filamentous chains, notably with large gas vesicles that allow the cyanobacteria mats to move up and down in the water column in search of favorable growth conditions. Dolichospermum cells also have the capability of forming heterocysts and akinetes, the former being a cell that fixes nitrogen and enables the population to continue when local nitrogen is depleted, and the latter being a thick-walled cyst that can rest dormant in the sediment until conditions are ripe for another bloom. Like Microcystis, Dolichospermum produces microcystin, causing the symptoms listed above. Some strains of Dolichospermum produce more diverse toxins, including alkaloids and lipopolysaccharides that function as neurotoxins, cytotoxins, and dermatotoxins. The best way to prevent exposure to these toxins is to avoid contact with and consumption of water where a bloom is occurring, or has recently taken place.

As with Microcystis, eutrophication and warmer waters due to climate change both induce and exacerbate Dolichospermum blooms. A secondary impact of climate change, increased variability in rainfall, is likely to promote Dolichospermum prevalence in freshwater communities as the unique akinete survival strategy allows the species to survive droughts and floods that other less toxic species cannot withstand. 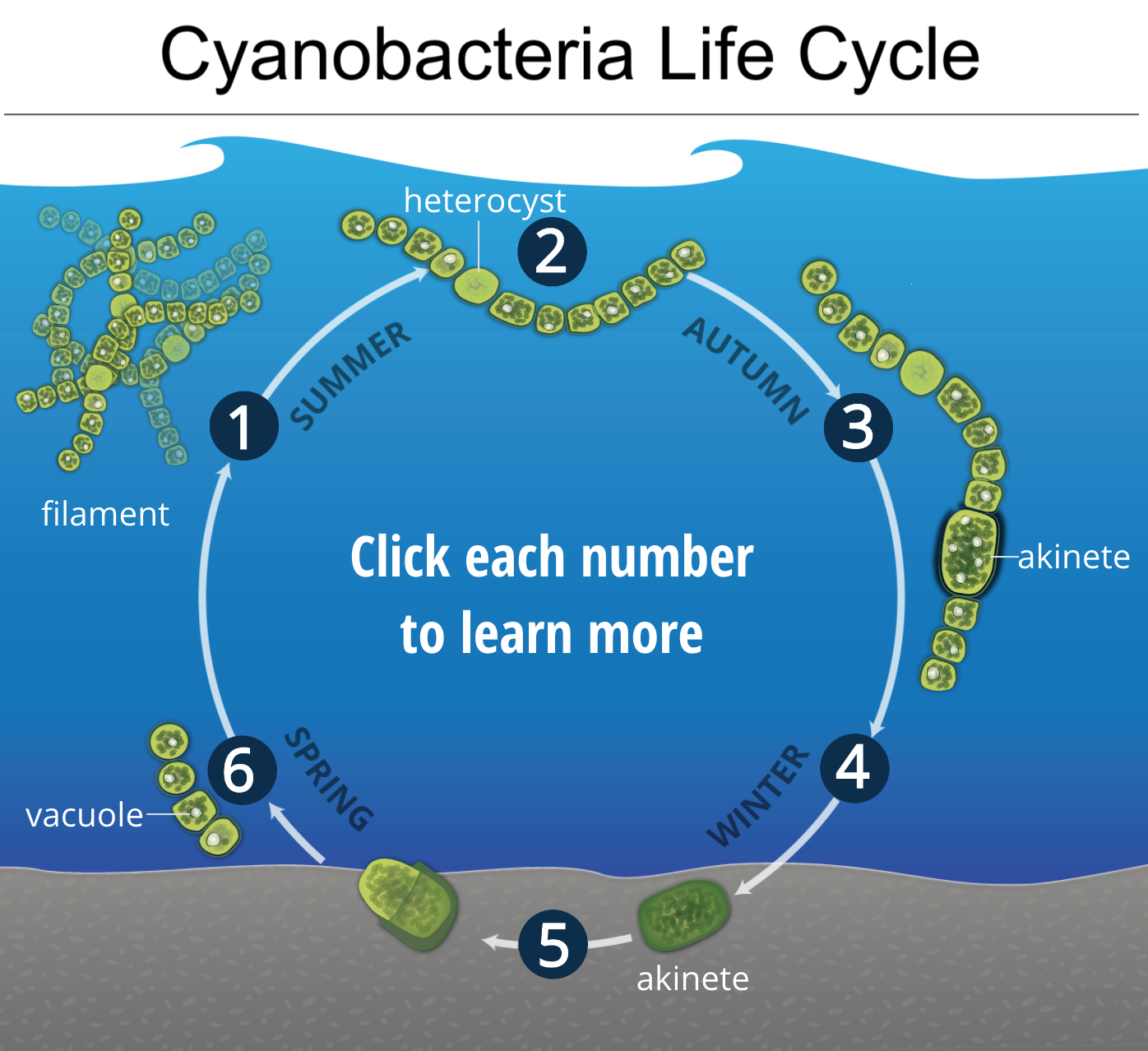 Cyanobacteria have a multi-phasic life cycle that plays a significant role in their bloom dynamics and impacts. Please click on the above figure to access an interactive graphic of the cyanobacteria life cycle.