In early 2011, we issued a seasonal forecast for a moderate regional Alexandrium bloom in the Gulf of Maine.  This forecast was borne out, as can be seen by the 2011 closure map.

The 2011 bloom followed what we consider to be a "typical pattern" for the Gulf of Maine, with toxicity appearing first within and near Casco Bay, then increasing in western Maine, New Hampshire and Massachusetts and subsequently decreasing in those areas in June.  June and July saw toxicity appearing in far eastern Maine, but it was limited to that area and did not extend beyond that area. 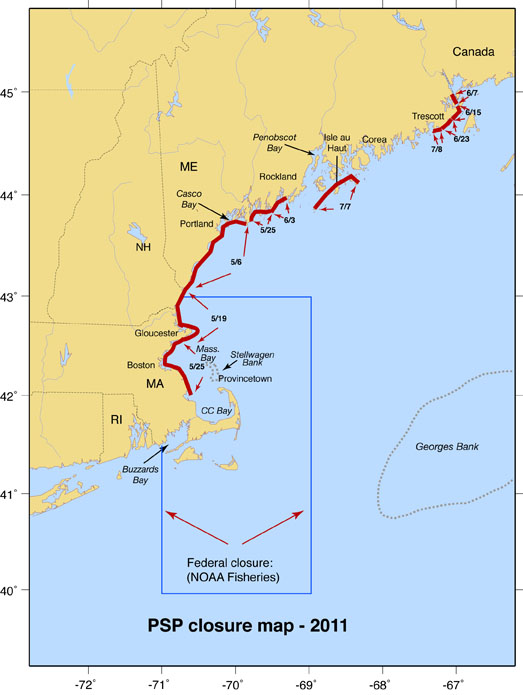 Mussel harvesting closure areas along the New England coast during 2011. Compiled from information provided by the Massachusetts Division of Marine Fisheries, the New Hampshire Department of Environmental Services, and the Maine Department of Marine Resources.

A large scale cyst mapping survey conducted in the fall of 2010 revealed a moderate number of Alexandrium resting cysts in the Gulf of Maine relative to prior surveys conducted for the past six years.  As we have done since 2008, this new cyst map was used as the basis of a forecast using the Alexandrium population dynamics model.  Using weather and oceanographic conditions from each of the 7 preceding years (2004 - 2010) an ensemble forecast was obtained that suggested that a “moderate” regional Alexandrium bloom might occur in 2011.  In other moderate years, we have had closures extending through western Maine, New Hampshire and into parts of Massachusetts, such as in 2006.  In severe years, toxicity has extended as far south as Nantucket and Martha’s Vineyard islands.

As of this writing, the regional bloom has resulted in shellfish harvesting closures in a small portion of eastern Maine as well as western Maine, New Hampshire, and from the NH border to Plymouth, Massachusetts.  A map showing areas closed to harvesting is provided. Note that this map is provided for general information only and should not be used for harvesting decisions.  (Please consult state websites and local shellfish wardens regarding closure status for your area.)

There are no large-scale regional cruises planned for this bloom season and thus only limited cell count information is available.  We know that Alexandrium cells have been detected in Massachusetts Bay at concentrations of a few hundred cells / L with a maximum of 676 cells / L.

The closures shown in the map may reflect a sustained period of easterly and northeasterly winds over the past several weeks, as these will have pushed surface waters and their associated Alexandrium populations to shore.

A new instrument called the Environmental Sample Processor (ESP) was deployed in close collaboration with Chris Scholin and his team from the Monterey Bay Aquarium Research Institute (MBARI).  The ESP was moored in coastal waters off of Portsmouth, NH where it processed water samples and autonomously analyzed them for Alexandrium abundance, transmitting the data to shore.  The ESP detected Alexandrium cells early in the season, but a mishap occurred, possibly due to bad weather or a vessel accident, resulting in the separation of the surface buoy from the mooring and instrument package.  Communications were lost as was the surface buoy, but we believe the instrument is still collecting data.  Meanwhile, we are prepping another ESP mooring and instrument for deployment in early-mid June. That mooring is based on a different design used for acoustic right whale detection. It will be a very large platform 8nm miles offshore (4nm further offshore than the current ESP position). With this effort, we hope to reestablish remote HAB sampling soon, extending into mid-July.

When the 2011 forecast was issued, we qualified the outlook based on observations from NOAA’s Ecosystem Monitoring Program (EcoMon) surveys and data from a Fisheries and Oceans Canada's Atlantic Zone Monitoring Program (AZMP) mooring off of Nova Scotia.  Both of these datasets suggested that water masses entering the Gulf of Maine might be similar to the anomalous conditions observed in 2010, which we believe adversely changed the hydrographic and nutrient conditions in the Gulf of Maine at the time of Alexandrium emergence from its resting cysts, resulting in the suppression of the 2010 bloom.  We don’t yet have sufficient information to evaluate whether or not these water mass characteristics have persisted during the current bloom season, but we expect new information in June that we will post here.