In recent years, the genus Karenia has made the news in the United States as a result of the massive red tides caused by Karenia brevis.  These blooms have caused widespread fish and wildlife mortalities and impacted public health in Florida leading to significantly disrupted tourism and fisheries industries which have cost local economies millions of dollars in damages on an almost annual basis. Compared to this notorious HAB species, its sister species, Karenia mikimotoi, is less toxic but more globally widespread with blooms reported in Ireland, Norway, India, Japan, Korea Australia, South Africa, Alaska, Texas, and the east coast of the U.S. The blooms of this species can stretch many kilometers, persist for multiple months, and reach concentrations of several million algal cells per liter.

There have not been confirmed reports of direct impacts to human health by Karenia mikimotoi, but blooms of this species can cause large-scale mortality events of marine fauna such as shellfish, echinoderms, crustaceans, and fish. Karenia mikimotoi has been shown to produce several toxic compounds as well as reactive oxygen species, but toxicity is highly variable by strain and the factors contributing to mortality events are still not entirely understood. Although overall concentrations of toxins in K. mikimotoi appear to be relatively low, there is evidence that their effect may be enhanced when the cells come into direct contact with fish gills. Anoxic conditions can also occur when K. mikimotoi cells die in large numbers and subsequent breakdown by bacteria deplete oxygen in the surrounding waters. These anoxic events have also contributed to die-offs.

What is the history of Karenia in the Northeast?

Karenia mikimotoi was first isolated from a coastal lagoon near Woods Hole, MA in 1957 and classified at that time as Gyrodinium aureolum. Since this time, large scale blooms of K. mikimotoi appear to be an emerging problem in New England, with the first occurrence in Maine reported in August, 2017. This bloom was concentrated in the Fore River, Portland Harbor, and parts of the Harpswell coastal waters, and coincided with a die-off of softshell clams in Brunswick, ME. This mortality event cost fishermen $250,000, but a direct causal link between the bloom and shellfish mortality was not established. In August 2019 another bloom occurred in Casco Bay, with no mortalities recorded. Karenia mikimotoi is periodically found in Massachusetts waters, usually in the summer and early fall.

What are the impacts of Karenia blooms in New England?

To date, harmful impacts by Karenia mikimotoi in New England have been few, but this species has the potential to be damaging to fisheries and the aquaculture industry. In other countries, such as Japan, blooms of K. mikimotoi have resulted in mass mortalities of farmed fish and shellfish. Relocation of aquaculture pens, when possible, may be effective at mitigating the impacts of the bloom. However, caution should be used in this practice, as studies have shown that cells can survive intact in shellfish digestive tracts. This means that K. mikimotoi could potentially be inadvertently introduced to new areas when shellfish are translocated. It is also recommended that ships avoid pumping ballast water from regions impacted by K. mikimotoi in order to avoid the spread of this and other HAB species.

Karenia mikimotoi is included in routine phytoplankton monitoring by state agencies such as the Maine Department of Marine Resources (DMR) and the Massachusetts Division of Marine Fisheries. During the 2017 bloom, the Maine DMR recommended that seafood dealers source storage water from areas not impacted by the bloom. 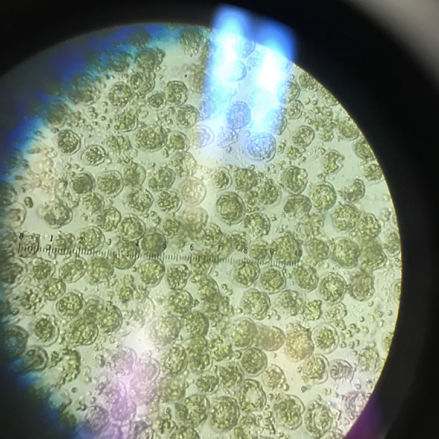