In early 2012, we issued a seasonal forecast for a moderate regional Alexandrium bloom in the Gulf of Maine.  This forecast was borne out, as can be seen by the 2012 closure map.

Toxicity appeared first within and near Casco Bay, then extended to near Penobscot Bay as well as south of Casco Bay.  Toxicity was fairly early in eastern Maine (closures in May and June). The coast of New Hampshire was closed in mid-May. Closures on the south shore of Massachusetts occurred in late May.  The area between Gloucester, Mass. and the New Hampshire border was not closed - a bit unusual since there was toxicity to the north and the south of that area. 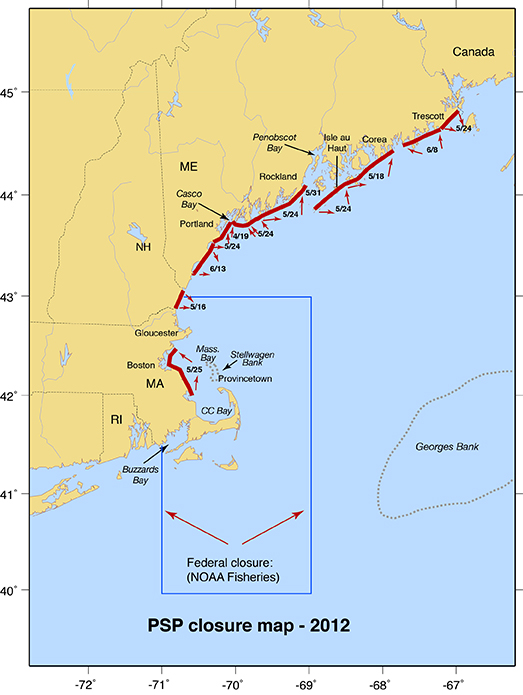 Mussel harvesting closure areas along the New England coast during 2012. Compiled from information provided by the Massachusetts Division of Marine Fisheries, the New Hampshire Department of Environmental Services, and the Maine Department of Marine Resources. 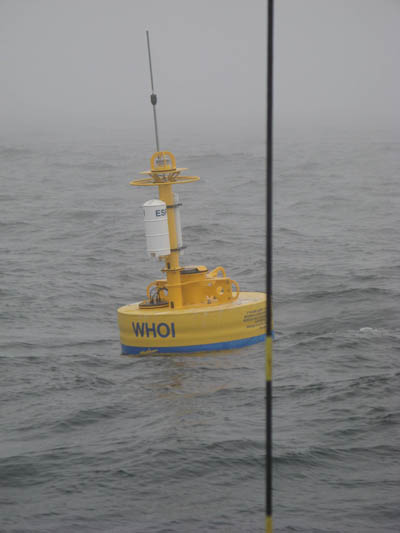 ESPchris taken during the ground truthing surveys in May 2012. The wire in the foreground is the CTD cable from the R/V Tioga. (WHOI / B. Keafer)

Just wanted to report before the weekend that ESPchris has detected low concentrations of Alexandrium catenella again. The signal from yesterday was positive, but the intensity was very weak with the value in the 50-100 cells/L range--right at the detection limit.

ESPchris is currently processing a sample now (13:20pm on Friday June 1) with another result available later today. I will report again late today if there is any change.

Given the HydroMet Outlook posted yesterday from Dave Valle et al (NWS-Taunton), ESPchris can expect an upcoming period of NE winds accompanying a coastal storm (or two). You can be assured that we are keeping a close eye on the results to determine if there is an abrupt rise in the Alexandrium concentration or Psuedo-nitzschia sp. following the storm(s).

Let's hope ESPchris weathers the conditions next week and reports back,

ESPchris has not detected Alexandrium catenella since May 9 (detection limit is about 100 cells/L). Other Psuedo-nitzschia probes on the filter array have also not detected anything since deployment on May 2.

Ground truth samples (Alexandrium and nutrients) were collected at the buoy last week (May 23-25) on the R/V Tioga and indicated that no Alexandrium catenella cells were present based on live microscope counts. That result provided reassurance that ESPchris is still working properly despite the lack of detection during the last couple of weeks. Today's result is just in and again the filter array showed no detection.

Alexandrium and nutrient samples were also collected along 3 transects in the western Gulf of Maine to broaden the scope of the survey. Conditions were too difficult to examine samples at sea, but a few selected surface samples were examined upon return to port in the evening. The very preliminary results indicated that about 600 cells/L were present in northeast Casco Bay, while 160 cells/L were detected just offshore of the Bay. Few cells were observed in the more offshore surface waters. Similarly, surface samples near Cape Porpoise indicated that about 100 cells/L were present at the two stations located closest to the coast with few cells detected further offshore. The picture that emerges is a relatively low population (especially for this time of year) present in the western Maine coastal waters out to about the same distance offshore as ESPchris (5-6nm). So the instrument is well positioned to detect that population if it is transported further westward along the coast...of course the concentration of cells must remain above the detection limit of the instrument for ESPchris to report positive signals.

We do know that there are cells present to the south of the buoy within Mass Bay with shellfish toxicity reported there last Friday. To determine if cells were present at depth and possibly not sampled by ESPchris, samples were also collected at 1m, 10m, and 20m during the survey, but those results will not be available in the short term.

That's all for now...If we detect something, please know that you will be notified ASAP,

PS I would like to thank Dave Townsend, Maura Thomas and Dave's student, Sugandha Shankar from UMaine for their stellar performance with the CTD and the collection of the nutrient samples needed for ground truthing the SUNA nutrient analyzer on the buoy. Inci Tuney, a postdoctoral investigator working with Kate Hubbard in the Anderson lab was heroic in fighting off 3 days of seasickness to obtain the Psuedo-nitzschia samples...and Jeff Stanwix, my Co-op student in the Anderson lab was solid during his first trip in the Gulf of Maine collecting the Alexandrium samples...and finally to Captain (Ken Houtler) and the mate of the R/V Tioga (WHOI) who go way beyond the norm to make the science at sea successful.