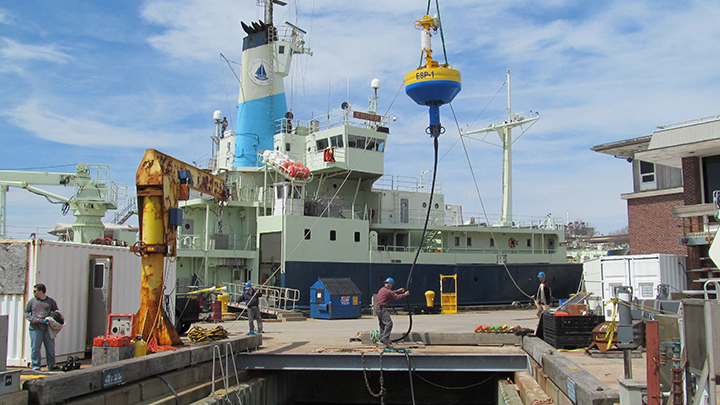 Deploying ESPdon in the WHOI deep well for testing prior to deployment in the Gulf of Maine. (Bruce Keafer, WHOI)

The autonomous HAB sensors used by the HAB Observing Network – New England (HABON-NE) will provide year-round surveillance at key locations across the region and others as needed through use of novel mobile platforms. The latter enable cost-effective redistribution of sensor assets to address seasonal shifts in HAB geography, and also rapid redeployment when blooms develop in unexpected areas. The network’s core sensors are two advanced robotic instruments, the Imaging FlowCytobot (IFCB) and the Environmental Sample Processor (ESP). Both discriminate HAB cells from non-harmful phytoplankton but differ in their approaches to detection and quantification.

The ESP is a robotic biological sensing system that is deployed on an offshore mooring for months at a time, transmitting species and toxin data to shore in real-time. It collects and processes water samples, and identifies and quantifies HAB species, which frequently resemble non-toxic species even at the microscopic level. Likened to a “molecular lab in a can”, the ESP uses a system of cartridges or “pucks” that successively concentrate plankton, generate and clarify chemical extracts, and then compare the extracted ribosomal RNA and/or toxins to known HAB species.  Raw ESP data is in the form of chemiluminescent macroarray images. Analyte concentrations are proportional to spot intensities and are interpreted through comparison to pre- and post-deployment standards. By clarifying the identity and concentration of algae in real time, at locations sometimes miles offshore, a network of ESPs gives researchers an accurate way to map large scale algal blooms throughout the season. This kind of ESP network has been used to monitor the Gulf of Maine since 2012. 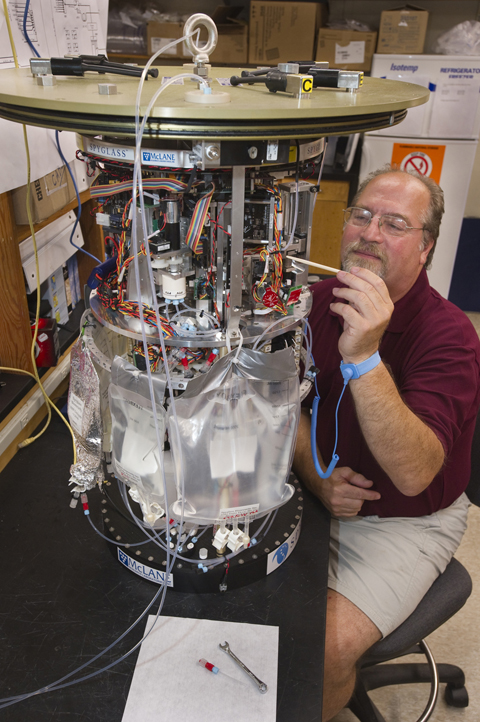 The primary limitation of the ESP is the sampling capacity. While it can collect passive environmental data continuously, such as salinity and temperature, the molecular analysis components are space limited and each puck is single-use. Deployments in the Gulf of Maine will include two versions of the ESP, the current commercial model and a new high capacity variant called short puck ESP (or spESP). Standard ESPs have a hard limit of 44 observations per deployment whereas spESP makes up to 64 through use of new, thinner pucks.  In addition, ESPs are deployed along with an Imaging FlowCytobot, a submersible imaging-in-flow cytometer that enables computer-based counting of diverse phytoplankton cells. When suspected HAB cells are seen in IFCB images, the ESP can be triggered to confirm the species identification and estimate bloom toxicity.