In 2007, toxicity was restricted to sections of Eastern and Western Maine. A large, offshore bloom was documented on Georges Bank as well.

The Gulf of Maine survey is now complete (see right). Cell counts along the Maine coast hit a peak of 2268 cells per liter offshore of Frenchman’s Bay before decreasing again from Cape Split to Cutler. The bloom is intensifying in the Bay of Fundy, with peak concentrations of 2814 cells per liter on the Nova Scotia side.

Overall this regional pattern in the Gulf of Maine and Bay of Fundy is fairly similar to what has been observed in the past at this time of year.

We will spend our remaining time re-sampling the Georges Bank bloom at high vertical resolution. I’ll send a final update later this week. We are due back at WHOI on Thursday. 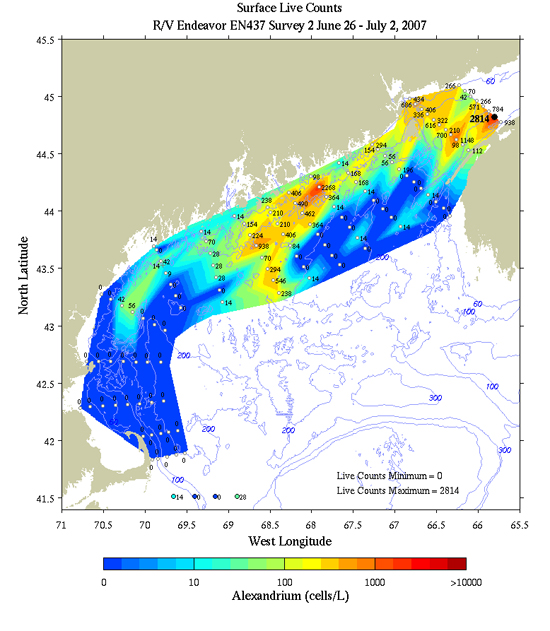 All stations in three transects east of Cape Cod, the Boston line, and the Cape Ann line came up blanks except for a few 14s and one at 28 cells per liter. We have started to see cell counts rise as we have entered western Maine waters. Significant concentrations are evident in offshore waters, apparently coinciding with an offshore turning of the Maine Coastal Current that is visible in satellite imagery.

We will provide another update once we are a little farther up the coast. 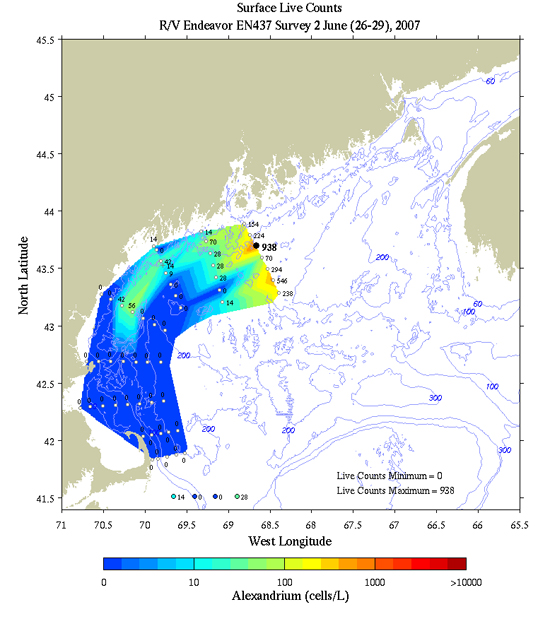 We began our second cruise with a re-occupation of our southern New England Shelf and Georges Bank surveys (see right).

Today we began our coastal survey with transects east of Cape Cod and will proceed up the coast. If you would like to follow our progress you can go to the Endeavor home page http://techserv.gso.uri.edu/ and click on "Where is Endeavor now" at the upper left.

We will keep you updated as things unfold. 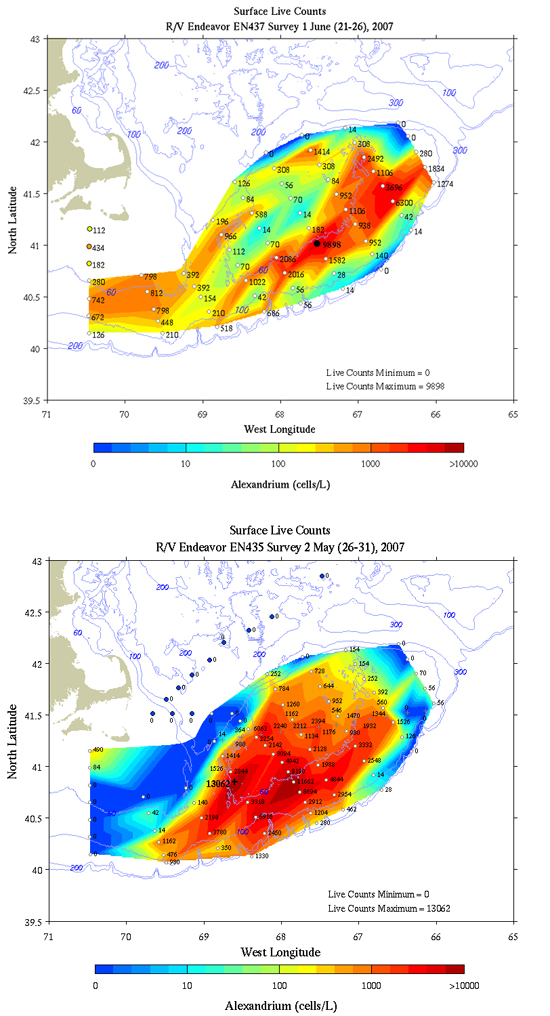 Voyage #435 of the R/V Endeavor came to a successful conclusion today. We completed our survey of Georges Bank and the offshore waters south of Nantucket and Martha’s Vineyard (see right; note log scale of the color bar). Alexandrium concentrations in excess of 1000 cells per liter covered most of Georges Bank.  Highest abundances occurred along the Southern Flank, with peak concentrations just over 13,000 cells per liter.  The population extends southwest of Georges Bank along the outer continental shelf, consistent with the southwestward exit pathway from the bank at the southern end of the Great South Channel.

Alexandrium was absent from the live counts in the offshore portion of the Martha’s Vineyard transect.  Alexandrium was detected in the innermost 2 stations at concentrations of 84 and 490 cells per liter.

For your information I have also included a larger scale map that encompasses all stations (except for the underway measurements that are still being taken). 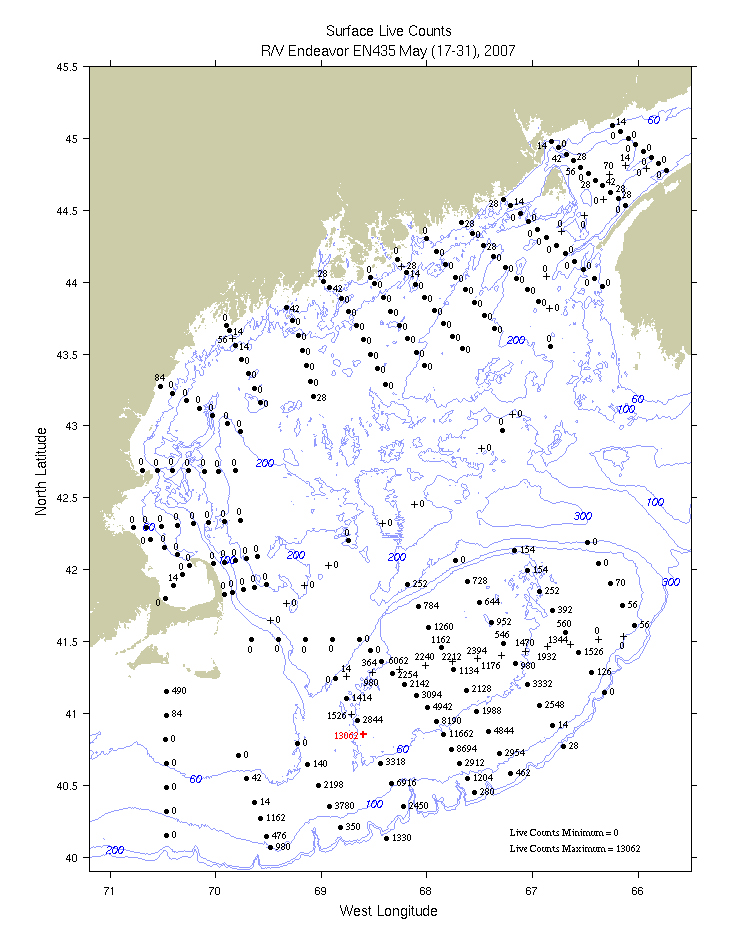 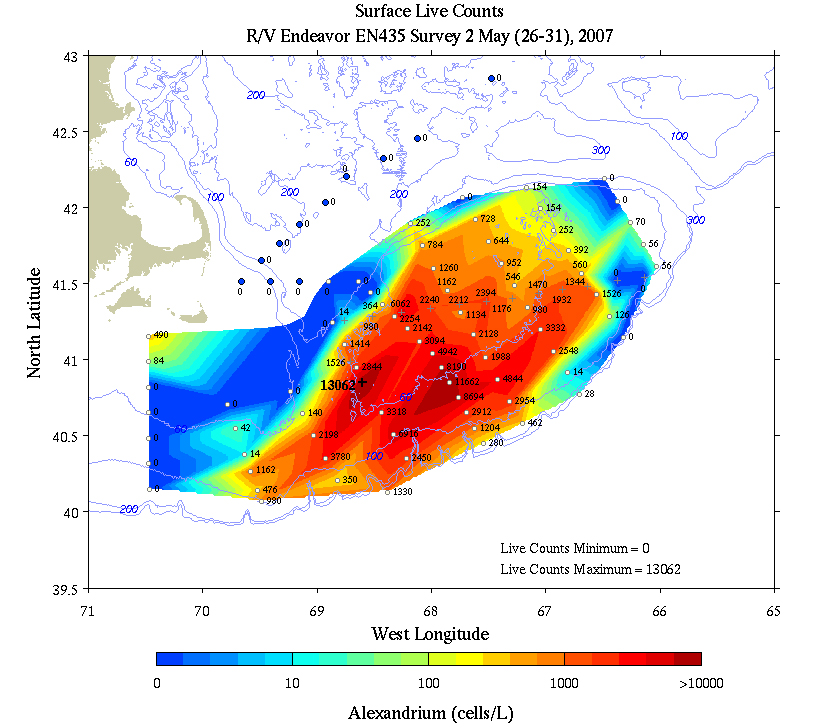 Memorial Day Weekend has been a very busy one aboard R/V Endeavor.  After transiting south from the Bay of Fundy to the eastern shore of Cape Cod taking underway samples the entire way, we had yet to break the 100 cell per liter mark.  That all changed when we reached Cultivator Shoal on Georges Bank, where cell concentrations rose sharply to thousands of cells per liter.  We have completed two cross-bank sections thus far, and had to extend these all the way to the shelf break to delimit the population. Highest abundances have occurred along the Southern Flank, with peak concentrations just over 11,000 cells per liter.  Given these findings, we have revised our sampling plan to cover the entirety of Georges Bank as well as the exit pathway in the southern part of the Great South Channel.  We will keep you informed as this unfolds.  In the meantime, a map of what we have so far is shown on the right. 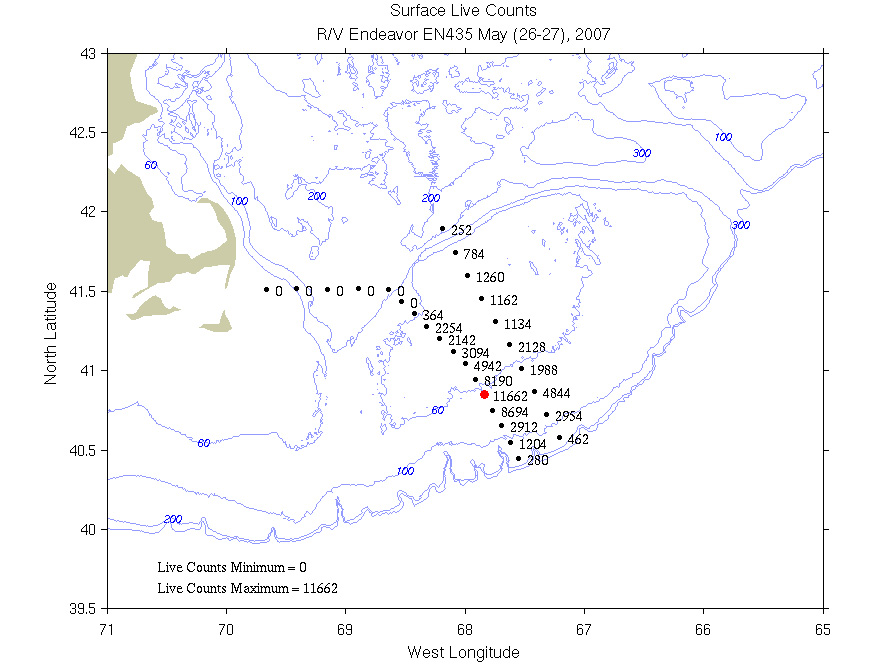 We have continued surveying eastward, and are nearing the mouth of the Bay of Fundy. Much to our surprise, surface live counts continue to come up mostly empty, with only a few nearshore stations showing any cells at all (see right).  What a difference a year makes!

Interestingly, Ruoying’s forecast model is predicting low cell concentrations as compared to last year, although not quite as low as we are observing.  We are currently investigating the mechanisms underlying this dramatic interannual variability.  At the moment the hypotheses on the table are: (1) lower source population: both the Bay of Fundy and Western Gulf of Maine cyst beds are down from last year, 30% and 20% respectively; (2) unfavorable growth conditions: it may be that the windy spring we have had thus far has led to deeper mixed layers leading to increased light limitation.   The possibility of temperature limitation has been discussed, but observations from GoMOOS moorings A, B, E, and I suggest surface temperatures are about the same as they were this time last year.  Perhaps the nutrient data being collected on this cruise (to be processed after the cruises are over) will provide some clues. 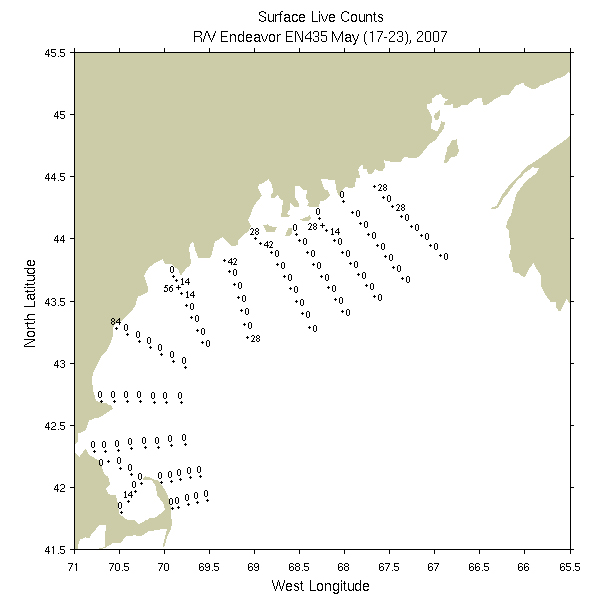 We have completed the southwestern block of our survey plan, from Cape Cod to Cape Ann (see right).  Surface live counts have all been zeros except for one station in which a single cell was observed (corresponding to a concentration of 14 cells per liter).  This constitutes a dramatic change from this same time period in 2006, when most of the area was covered by several hundred to several thousands of cells per liter (see map).  In interpreting this comparison, please keep in mind that the recent observations were collected during and in the aftermath of significant wind forcing, resulting in surface mixed layers of up to 40m in some places.  Therefore the possibility of subsurface populations cannot be discounted.

We are proceeding up the coast and will keep you updated as things unfold. 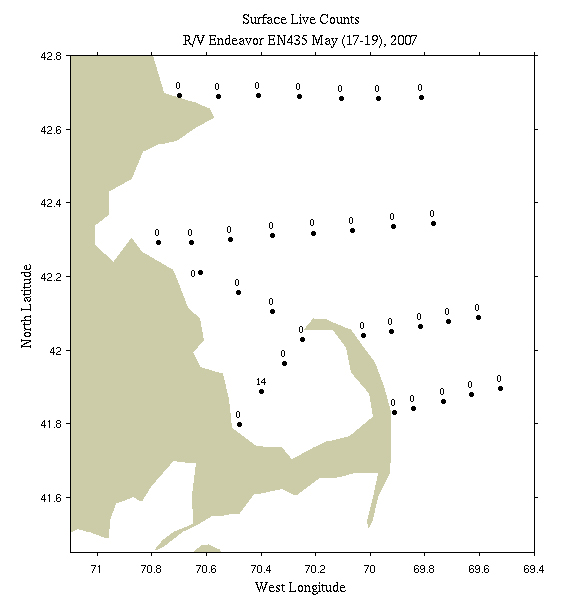 A few preliminary cell counts are now available as the Alexandrium field season in the Gulf of Maine unfolds.

The R/V Tioga is not in survey mode this spring as in 2005 and 2006, but we sampled a few stations in Mass Bay in early May as part of the GOMTOX program. Most stations were negative with a few cells detected in Cape Cod Bay using the live count method (see map, right). The positive samples (max = 47 cells/L) were not confirmed by the molecular techniques however. In addition, two automated McLane phytoplankton samplers were deployed on Stellwagen Bank at 31m and just off the Bank at 5m, but those data are not available in near real time.

Finally, the R/V Endeavor departs tomorrow (May 17) on the first of two major 15-day surveys in the Gulf of Maine.

It appears the bloom is slow to progress this year--but the current upwelling favorable conditions will turn downwelling favorable as a coastal storm approaches Friday through the weekend--so stayed tuned. 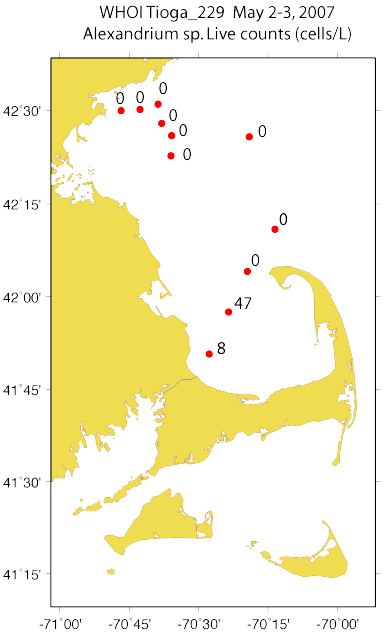 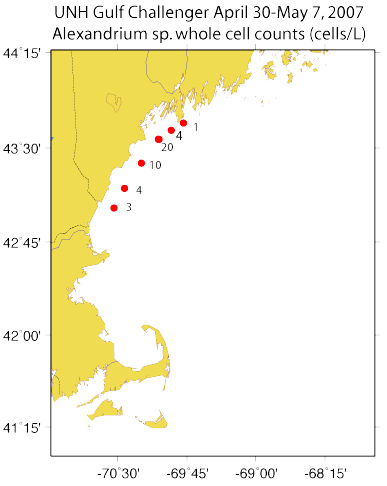 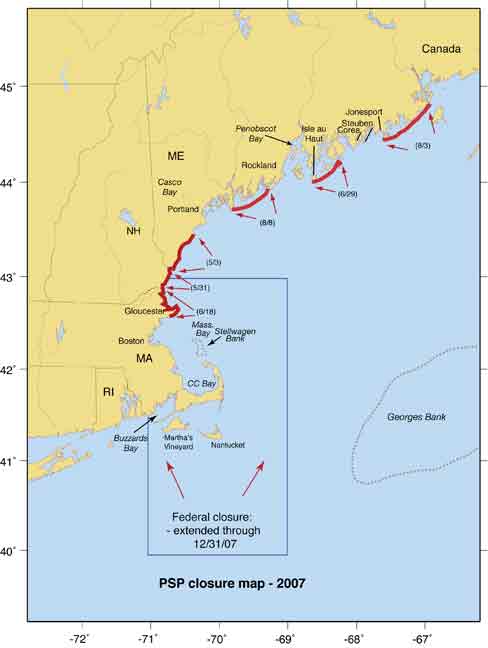 Mussel harvesting closure areas along the New England coast during 2007. Compiled from information provided by the Massachusetts Division of Marine Fisheries, the New Hampshire Department of Environmental Services, and the Maine Department of Marine Resources.